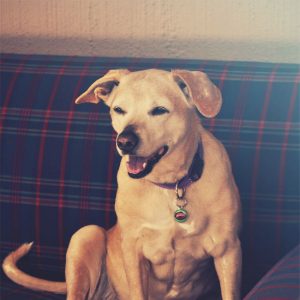 I’ve always been an animal lover and growing up we always had dogs in the house or birds in the Avery. But my obsession and love for dogs really grew once my boyfriend, now husband, and I decided to get a dog of our own and start our little family. We weren’t sure where to start or how to go about this but were very excited about our decision and knew this was “the next step” we were ready for. We had decided on the breed and sex of the dog we wanted, a little golden girl Labrador would make a fantastic new addition but really, we had no idea who to contact or where to go.

So, we decided to contact the vet in our area who I’ve known since I was a child, the one and only Dr.Greenberg aka Dr. Platzhund who recommended that we adopt and gave us the details of Kitty and Puppy Haven at the time. We were so excited and phoned them immediately and would you believe it, they had just found a litter of 11 puppies on the side of a highway and they were 99% sure they were Labrador puppies. Oh, my word the level of excitement was through the roof, we jumped in the car and headed off to meet our pup!

There she was in a pink plastic dog house the shape of a fairy tale castle was a little girl pup, the runt of the litter, wearing an army camo jersey, rough housing it with her siblings was Frankie, pint size, all of 7 weeks old making her big presence known! We fell in love immediately; we would have to wait a week or two before we could take her home so they could check the litter out properly and give the usual meds and vaccinations.

No one can properly prepare you for having a new puppy in the house and we were completely overwhelmed with vet visits, puppy training classes, middle of the night potty training sessions and constantly looking for the T.V remote which although Frankie had many, many toys of her own she believed it belonged to her. That was 12 years ago, Frankie is now the old lady of the house, she’s not as playful as she once was, we never have to look for the TV remote unless she’s sleeping on it and although she didn’t turn out quit the pure bred Labrador we thought we wanted she has been the best thing that happened to Rob and I!

A few months after we got Frankie we were at a funeral (bear with me the story gets better) my cousin told me that his 2 Labradors had just had a littler of puppies would I be interested in taking one? YESSSSSSSSSSSSSSSSSS!!!!How exciting a Labrador pup of our very own and a little sister for Frankie how could we say no? our family would be complete! After an agonising 6 week wait our baby girl Summer was ready to be collected and once again, we were in the car driving to fetch a little girl pup! 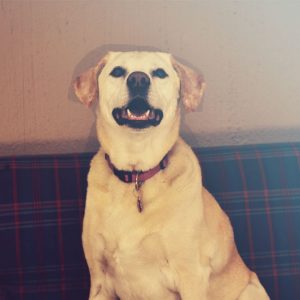 Now if anyone reading this knows me in person you know that I’m extremely clumsy and after climbing out the car and ringing the bell at the gate of my cousin’s house I stepped back and fell one leg in and one leg out of a man hole! Just my luck the man hole cover had been stolen a few days before-only in South Africa! Anyway, after pretending that my bleeding leg was actually fine and not sore as hell, we collected Summer and were on our way to the vet to get her checked out, the little thing cried the whole way from Benoni to Sandton.

“She is just absolutely perfect, just look at her, are you sure you want to keep her and you aren’t willing to sell her to me??” said our vet holding Summer up for everyone to look at in the waiting room. “Oh no, she’s coming home with us” I announced as politely as possible. Our little family was complete and although it took awhile for Frankie to accept that Summer was staying, we haven’t looked back. Summer is now 11 years old and just the most wonderful dog and best described as a “peaceful, loving dog who likes to eat!”

Five years later and Kitty and Puppy Haven put out a notice that they were in dire need of funds and were totally over run with dogs and puppies that needed to be adopted. Ok well we thought it’s gone so well with the two girls why don’t we get a male pup, small breed to shake things up and so I can have a little lap dog to cuddle with. Not that Frankie and Summer don’t think they are lap dogs its just not that comfortable cuddling a 30KG Labrador on your lap on the couch trying to watch America’s got talent.

On arrival at Kitty and Puppy Haven we were taken to meet Rafferty, the cutest little thing you could have imagined with huge ears which we were told he would grow into and they were almost sure he was a Jack Russel puppy and would definitely be a small dog, just look at his sister. I’m not sure the little dog he was sharing the cage with at the time was his sister she might have been a little dog he was found with because they looked NOTHING like each other. 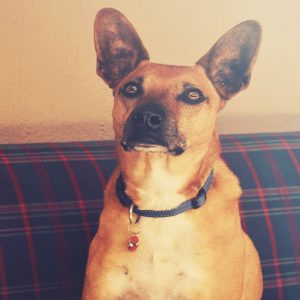 Rafferty was the perfect addition to our family he was playful yet quiet and obedient and slept in our laundry basket. That lasted all of 5 minutes boy oh boy he did not stop growing and is now a large dog and looks nothing like a little Jack Russel, more like a Congolese Hunting dog or Basenji if you will! He is never still and is constantly climbing up trees or jumping up walls or simply staring up at the ceiling patiently waiting to catch a Lizard-very strange little boy but extremely entertaining to have in the house!

Carla Hammond lives in Johannesburg, South Africa with her husband Rob and their three absolutely crazy but completely perfect dogs, Frankie, Summer and Rafferty. Before she started writing her new children’s book series Rafferty’s Big Adventures, Carla received her BSC in Speech Pathology at the University of Cape Town in 2005. To shake things up after five years of practicing as a Speech Therapist, Carla found her passion for education. She became a Nursery School Teacher, teaching 3-4-year olds for ten years. Carla now writes full time and is always on the look out for her next big adventure! 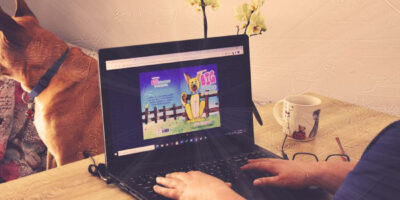 I’ve never thought of myself as much of a writer and was very surprised when the inspiration for a children’s... 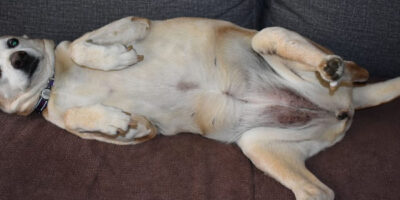 When my husband and I first moved in together we had a double bed which we thought was way too...